The City region Eindhoven traditionally has been a region of innovative hardworking and future-oriented people. Today, developments follow each other rapidly and tomorrow’s future is different from today’s. Therefore 21 municipalities work together in the Metropolitan Region Eindhoven. The Metropolitan Region Eindhoven is a lively collaboration and we work closely with various partners. Together we meet the challenges of the future and lay out a common strategy when it comes to economics, spatial development and mobility.

The entire area counts 780,000 inhabitants. We see the region as a daily urban system with strong mutual relations in the field of living-working-education-leisure time.

This area, which is also known as Brainport Region, is characterized by a very strong high-tech industry with ASML and NXP as very large international key players. Because of this the Metropolitan Region Eindhoven along with the Metropolitan cities Amsterdam and Rotterdam belong to the mainports of the Netherlands.

Apart from an urban area around Eindhoven, the region also has suburban and rural sub- regions. These areas are characterized by a high quality of living and recreation. They often have a village character with small, coherent communities. There is generally a strong connection with the village and the surrounding area.

It is the region’s ambition to rank among the top 5 in Europe and the top 10 in the world when it comes to economic strength and growth. We do this by organizing joint programs and implementation in triple helix concept. There is an intense collaboration between authorities, entrepreneurs and educational institutions.

A region where it is good to work, reside and live

The cooperation between the 21 municipalities in the Metropolitan Region Eindhoven has the purpose of realizing the ambition to rank among the top 5 in Europe and the top 10 in the world when it comes to economic strength and growth. In addition to a strong economic climate, we also work on an excellent climate for establishing a business and enjoying a pleasant living environment. A region where it is good to work, reside and live.

We and the 21 municipalities do this by reaching an access agreement on the major infrastructural access by road and rail as well as a good national and international accessibility of Eindhoven Airport. In addition, the municipalities make agreements on new work locations, while the establishment of new businesses is taking place by mutual coordination. In the area of housing, we are working on a differentiated living environment which responds [...] to the demands of the market. In doing so, we harness the distinct qualities of the sub-regions: urban environment, village setting, suburban living environment.

The cooperation between the 21 municipalities is not to be taken for granted. The governance structure in the Netherlands has three layers: Government – Province – Municipalities. These government bodies are democratically elected and have statutory duties and powers.

The cooperation between the municipalities takes place on a voluntary basis. But to reflect its importance, it is laid down in a common scheme. The Metropoolregio (Metropolitan Region) has no legal powers. Because of the democratic legitimacy, the powers and decision-making are with the municipalities. Also when it comes to regional plans.

The cooperation is built on the strength and position of the municipalities. The Metropolitan Region has a General Board in which all municipalities have a representation from the College or the Council. In addition, there is an Executive Committee consisting of the Mayors of Eindhoven, Helmond and Best. The Mayor of Eindhoven is also President of the Metropoolregio Eindhoven.

Once every four years, a cooperation agreement ("Samenwerkingsakkoord") with an annual implementation programme is drafted. For the period 2019-2022, we have the following main missions: economic strategy, energy strategy, accessibility, transition rural environment.

Municipalities and the councillors

These municipalities are working together: 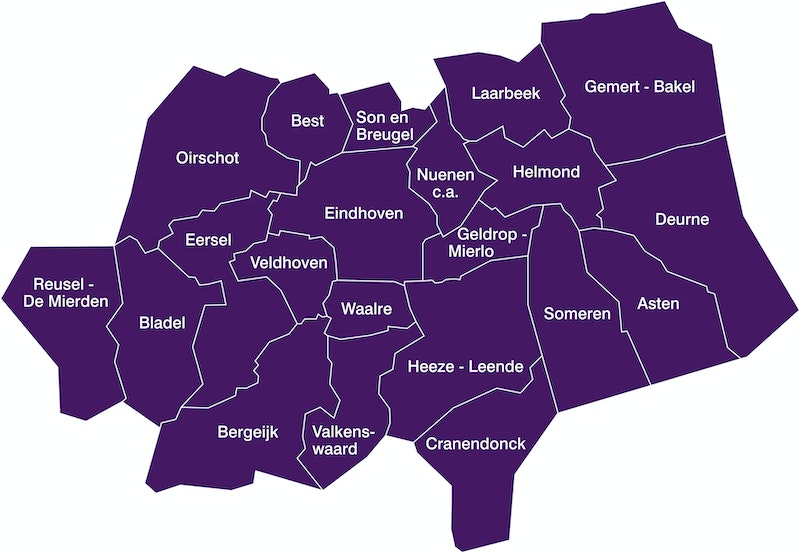